A Word From Our Displaced Kansas Neighbor and very gud friend.! T.C. - WØEAJ

Yes, boys and girls - there are two kinds of radio repairers/restorers... those who have had caps blow up and those who will...  The last time I had electrolytics blow up in my face was at KING RADIO Corp, back in the 60s.  They still had a few tube-radios going out the door, and in spite of good quality control, there were always a couple who were either marked backwards (+ and - reversed) or simply INSTALLED backwards.

Powered by these 85 pound non-regulated DC supplies called NFBs, you simply turned the variac knob on the front up, and got 'er up to either 14vdc or 28vdc, depending on the radio.  Yes, yes, we got lazy and simply turned the power switch on after a while, but occasionally, you WOULD get "surprised".

Move up to yesterday - I've been working on boat-anchors for some years now, and ALWAYS replace EVERY cap (except for micas, most of the time).  I had a Panoramic Industries PR-1 on the bench... a 1957 version of the legendary Hallicrafters Panoramic display, as used by the US military (primarily the US Navy) during WW-II.  I did find a dead-shorted 6X5 HV rectifier tube, so replacing that brought the variac's current draw WAY down to reality, so "fat dumb and happy", I'm waiting for the B+ to come up, and BANG!  The dual-section 16mfd @ 450v cap, literally blew apart, with the resultant shards of aluminum all over the place (including my reading glasses - good lesson there!), and bits of treated paper stuck to the other tubes, IF cans, and every piece of test equipment on the bench, not to mention my SHIRT... and did I mention the HUGE cloud of smoke?   Yes, like a good British car, if you let the smoke out, it quits working. 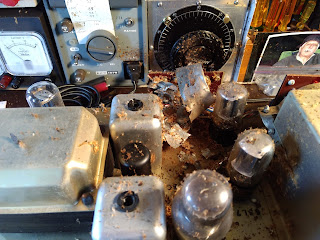